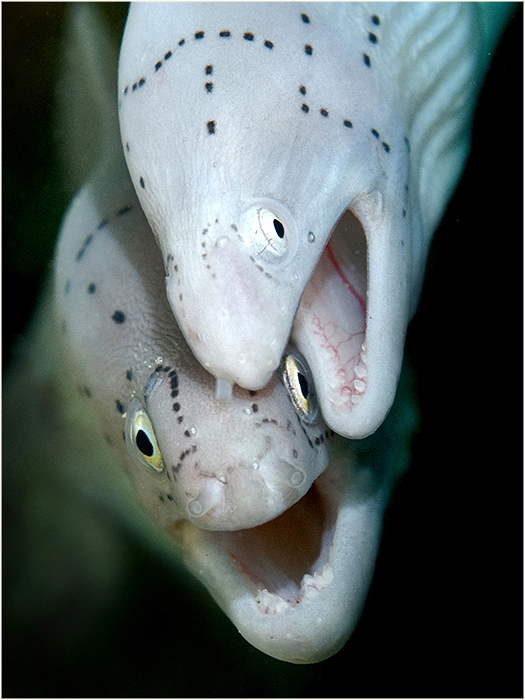 A little-known fact about moray eels is that they are sometimes recruited by Coral Groupers to help them while hunting for food. This is the only known instance of interspecies cooperation among fish.

Sometimes mistaken for eels there are 62 species of sea snakes and all are venomous. They are found in tropical waters of the Indo-Pacific and on average can grow to around four to five feet. As they do not have gills they must return to the surface to breathe although they can remain submerged for up to eight hours. The sea snake’s body is flattened laterally and its oarlike tail is used as a scull.

Placid by nature they are not regarded as dangerous to divers but they do need respect as their venom can be up to ten times more powerful than that of a rattlesnake or the deadly black mamba. You don’t want to meet one in a bad mood! Sea snakes can be quite curious and sometimes are attracted by their own reflections in the glass of an underwater photographer’s camera housing port. I discovered this when one diverted its attention from hunting and started swimming directly towards me. Finning backwards I waved my fin directly over its head and only then did it seem to think that I was not worth the effort and returned to its hunting.