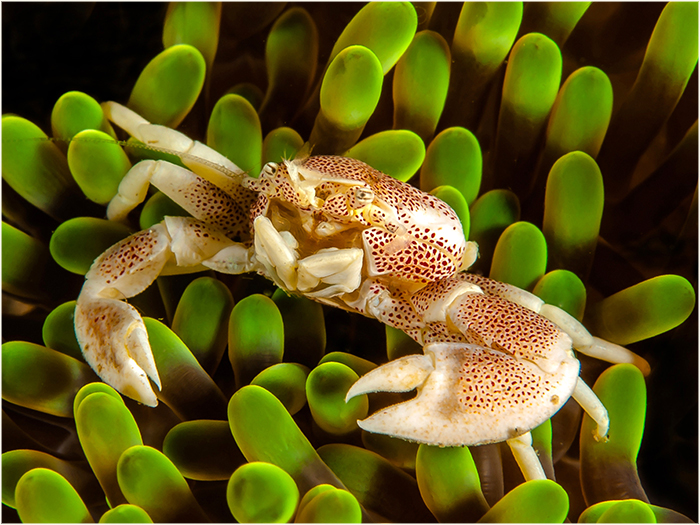 With more than 44,000 species Crustaceans are some of the most common creatures to be found in the ocean. Just like insects they are arthropods and have a tough external skeleton and jointed legs. Adult crustaceans have segmented bodies and jointed legs usually grouped into a recognizable head, thorax and abdomen.

All crustaceans have bilaterally symmetrical bodies covered with a chitinous exoskeleton which may be thick and calcareous like lobsters and crabs or delicate and transparent such as anemone shrimps. Since it does not grow, the exoskeleton must be periodically moulted when the animal undergoes metamorphosis from free-swimming larva to its adult phase or simply when it outgrows its skin. Most crustaceans have separate sexes and can be distinguished by appendage on the abdomen called swimmerets.

Crustaceans are divided into two main groups. The larger group includes shrimp, crayfish, lobsters,and crabs. The smaller group includes species that range from the microscopic and up to a few inches in size. Most of the smaller marine forms are found in plankton and are a vital part of the marine food chain. One of the most beautiful crustaceans is the Peacock mantis shrimp (Odontodactylus scyllarus) which is believed to have the most complex visual system of any creature in the animal kingdom.

If this remarkable quality isn’t enough these critters are capable of striking their prey with astonishing speed. In one study it took a specialised video camera filming at an astonishing 20,000 frames per second to freeze the strike (normal video is usually filmed between 25 frames to 30 frames per second) making it a record breaker as the fastest recorded feeding strike in the animal kingdom.