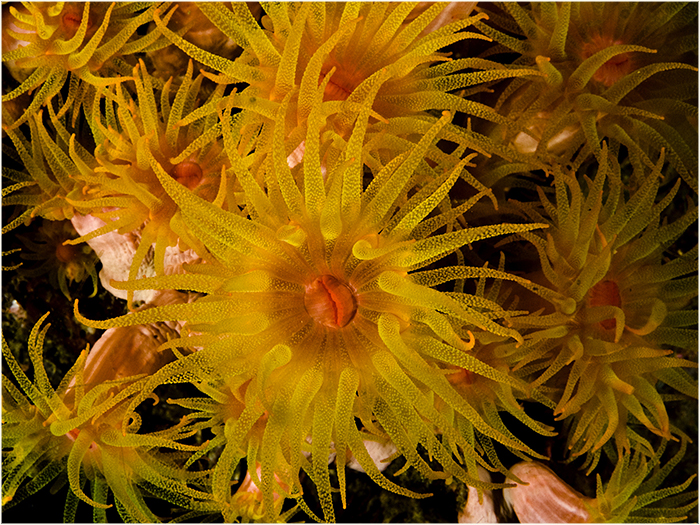 Coral reefs are home to the greatest storehouses of biodiversity on Earth perhaps rivalled only by the tropical rainforests on land. They are also among the oldest ecosystems and although they cover only 1% of the Earth’s surface they are home to 25% of all marine fish species. Coral reefs are the largest of Earth’s ecosystems yet each coral reef is the result of the building activities of tiny animals called polyps. Coral polyps are soft-bodied organisms related to sea anemones and jellyfish. At their base is a calicle – a hard, protective limestone skeleton which forms the structure of coral reefs.

Reefs begin when a polyp attaches itself to a rock on the sea floor, then divides or buds into thousands of clones. The polyp calicles connect to one another, creating a colony that acts as a single organism. As polyps die others grow over them. The reefs we see today are the result of this building process which has been going on for millennia. Some of the coral reefs we can still see today began growing over 50 million years ago.

Coral polyps themselves are colourless but the colours you see are from the presence in the corals of Zooxanthellae algae. This relationship is one of the natural world’s great symbiotic relationships. The algae get a stable home close enough to the surface to be able to photosynthesise – a process that itself produces nutrients for the coral polyps. As well as receiving these nutrients from the Zooxanthellae coral polyps feed using their barbed stinging tentacles or nematocysts which can capture zooplankton and even small fish.

When stressed especially by rises in sea temperature polyps will expel their symbionts causing coral bleaching which can lead to the eventual death of the coral colony. Coral reefs are under threat from pollution, rising seawater temperatures and acidification of the oceans. An estimated 25% of coral reefs have already disappeared and a further two-thirds of all coral reefs are at risk today. If the present rate of destruction continues, it’s feared that 70% of the world’s coral reefs will be destroyed by the year 2050. This would be devastating for the 750 million people who depend on coral reefs for their livelihoods and survival.