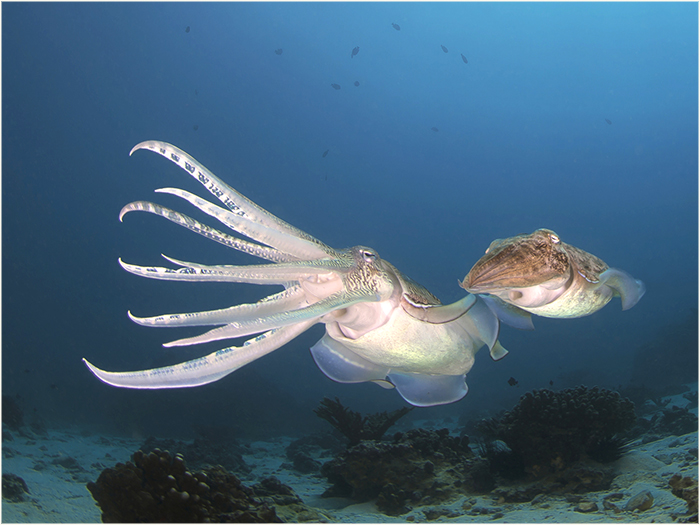 Octopus, cuttlefish and squid are Cephalopods (Greek for ‘head-feet’) referring literally to the fact that their feet are attached to their heads. Cephalopods, also mollusks, have large, well-developed brains and are widely regarded as the most intelligent of invertebrates. Most octopi and cuttlefish possess chromatophores which are coloured pigments in their skin enabling them to change colouration, patterns and skin texture in milliseconds. It’s fascinating to watch an octopus or cuttlefish move over the reef and see its skin change instantly to match the colour and texture of the reef – and amazingly most cephalopods are believed to be colour blind!

Cephalopods rely on their advanced vision and bioluminescence to detect predators and prey while some species use colourful, flashing displays to impress mates, confuse predators or communicate with each other. Octopus and Cuttlefish are preyed upon by sharks, eels and dolphins.

Their life span is usually quite short from six months to just a couple of years or so. Depending on the species the male can live for up to three years while females die at around two years shortly after reproducing. All cephalopods can move by jet propulsion but this is extremely energy consuming.

The octopus has no bones so it is highly flexible and manoeuvrable. They have three hearts, their blood is light blue and their bites are poisonous to their prey.

The most poisonous cephalopod is the Blue-Ringed octopus Hapalochlaena lunulata. The venom is the deadly tetrodotoxin – the same toxin produced by pufferfishes. This little creature carries enough venom to kill over twenty adults within minutes. Thankfully this octopus is not aggressive and most incidents with humans occur when they bite after being picked up or are stepped on.